136. Emceeing for the Dalai Lama, Humor in Public Speaking, And Engaging An Audience with Marty Wilson

The Dalai Lama, Humor in Public Speaking And Engaging An Audience with Marty Wilson

Marty Wilson from morefunnymoremoney.com was previously a featured guest in the Productive Insights Podcast Episode 89. He’s a pharmacist turned award-winning advertising copywriter, turned stand-up comedian, turned best-selling author and speaker. He’s spoken to over 500, 000 people since he first lit up on stage in 1997. In his first 12 months, he won Australian comic of the year and appeared on the footy show. He was invited to the UK to become a full-time stand-up. His keynotes and workshops are packed with scientific knowledge, takeaway tips and strategies and most importantly, wrapped up in countless, hilarious stories. He’s recently been invited to share the stage with Dalai Lama, almost did, which we talked about in this episode. 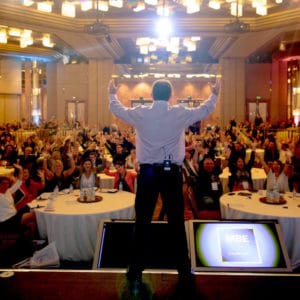